In Memory of
Elizabeth
Quinn (Spirit)
1925 - 2020
Click above to light a memorial candle.
Memorial Candle Tribute From
Bopp Chapel
"We are honored to provide this Book of Memories to the family."
View full message >>>
Send Flowers
Plant a Tree In Memory of Your Loved One
Click Here
Menu 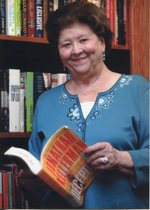 During WWII, she joined the Women’s Royal Naval Service in 1943 at age 18, serving at Bletchley Park with the codebreakers (without divulging that work to anyone including her family until secrecy was lifted in the 1970’s). She met her Yank soldier, John, at a dance, marrying June 18, 1945 and emigrating as a war bride to St. Louis. After the birth of their son, Jack, in 1946, Liz began working on the early bookmobiles in St. Louis County. Recently, the picture here was used by the County Library on the side of buses, as she was still an avid reader and began to use the bookmobile herself. She worked as a librarian at Doane Agricultural Service and then at General Dynamics until she retired. She became an American citizen soon after arriving, traveling her new home country with John for many years, and returning often with him to England for time with family and friends.

Living through the Depression, WWII, a new land away from her family, and the trials and tribulations of Life, she persevered. Loss of John, declining health, she persevered. She was One Tough Brit. She will be in the hearts of her family and friends forever.
In lieu of flowers, a contribution to St. Louis County Library Foundation or to a charity of your choice is appreciated.

A military veteran herself, she will be privately laid to rest with John at Jefferson Barracks National Cemetery. Hold your loved ones close as she held hers.