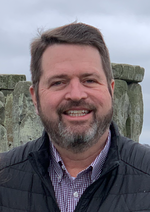 Jim was born on August 24, 1962 in Pana, Illinois to William Rodell and Luralene J. (Engeling) Tarter of Vandalia, and she survives.

In addition to his father, Jim is preceded in death by his sister, Sue Jordan, and his father-in-law, Deacon Paul H. Bruening.

A country boy from the very start, Jim spent his childhood on a dairy farm in Fillmore, Illinois. He graduated from Vandalia Community High School in 1980. Following in his Dad and brothers’ footsteps, he worked for two years in the coal mines. He then went on to study biology and chemistry at Illinois State University and graduated summa cum laude in December 1988. He continued his education at The University of Illinois College of Medicine-Peoria, where he was inducted into the Alpha Omega Alpha Honor Society upon his graduation in May 1993. Jim completed his internship at SUNY Syracuse in 1994, began his radiology training at St. Louis University Hospital where he was chief resident in 1998, and completed a musculoskeletal fellowship at the University of Iowa in 1999.

Jim was an avid hunter and fisherman who also loved to travel, watch movies, enjoy good food, and was passionate about red wine. Above all, he loved spending time with his beloved family.
In keeping with Jim’s generous spirit, it was his decision to donate his tissue and organs, so others may live. In honoring his wishes, he will be cremated.

A private celebration of life will be held on Saturday, December 5, 2020 at St. Francis Xavier College Church at St. Louis University. There will be a livestream link of the mass posted to his caring bridge: caringbridge.org/visit/jamestarter


In lieu of flowers, donations may be made to: James Tarter Memorial Fund
C/O Busey Bank, Attn: Peggy, 5720 West Main, Belleville, IL 62226, which has been set up so that the family can distribute the funds to those charities nearest & dearest to Jim’s heart, primarily Catholic Schools. He was the proud parent of children that went to Blessed Sacrament School, Cor Jesu Academy, St. Louis University High School, Creighton University and The University of Dayton.