In Memory of
Robert Eugene
Kuhlman
2021
Click above to light a memorial candle. 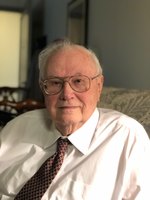 Born in 1932 to Irma and Carl Kuhlman, Bob grew up mainly in St. Louis, graduated from Roosevelt High School and attended Washington University and Washington University School of Medicine, graduating in 1956. In 1958, he married Ana Maria Padilla. After completing a research fellowship at the National Institues of Health with an associated appointment in the Public Health Service, he returned St. Louis to complete his surgical training in orthopedic surgery. He received the first grant establishing the Orthopedic Research Fellowship program at the medical school. From 1963 to 2001, he had a private practice in orthopedic surgery with an adjunct faculty appointment at Washington University. Over the 38 years of his surgical career, he co-authored numerous research papers and delivered presentations at Orthopedic conferences including the American College of Orthopedic Surgeons and the Association of the Bone & Joint Surgeons.

In his free time, Bob enjoyed Ana Maria’s cooking, home improvements, eating at great restaurants, and travel. He had multiple hobbies including electronics, radio, and photography.

Bob lost Ana Maria, his beloved wife of over 50 years in 2010. He is survived by his five children and their spouses: Lisa Krakoff (Roger), Marcie Ruddy (Tom), Robert (Jessica), Caroline (Michelle), and Richard (Peggy), and 10 grandchildren. A private mass in celebration of Bob’s life will be held for the immediate family. A memorial service is planned for the fall. In lieu of flowers, any gifts in memorium may be directed to the Missouri Botanical Garden or the Orthopedic Research Program at Washington University Medical School.